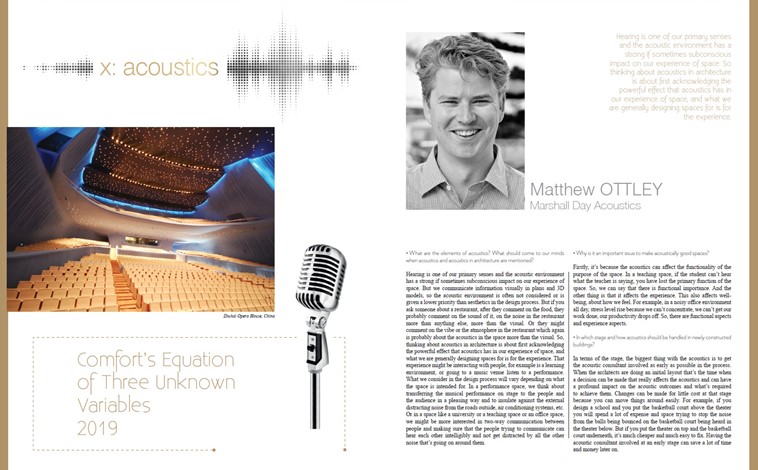 It's a great pleasure to share this article which appears in edition 63 of Konsept Projeler - a Turkish architecture journal. Marshall Day Acoustics' Matthew Ottley discusses the elements of acoustics, building and construction processes and shares some of our latest projects.

What are the elements of acoustics? What should come to our minds when acoustics and acoustics in architecture are mentioned?
Hearing is one of our primary senses and the acoustic environment has a strong if sometimes subconscious impact on our experience of space. But we communicate information visually in plans and 3D models, so the acoustic environment is often not considered or is given a lower priority than aesthetics in the design process. But if you ask someone about a restaurant, after they comment on the food, they probably comment on the sound of it, on the noise in the restaurant more than anything else, more than the visual. Or they might comment on the vibe or the atmosphere in the restaurant which again is probably about the acoustics in the space more than the visual. So, thinking about acoustics in architecture is about first acknowledging the powerful effect that acoustics has in our experience of space, and what we are generally designing spaces for is for the experience. That experience might be interacting with people, for example, is a learning environment, or going to a music venue to listen to a performance. What we consider in the design process will vary depending on what the space is intended for. In a performance space, we think about transferring the musical performance on stage to the people and the audience in a pleasing way and to insulate against the external distracting noise from the roads outside, air conditioning systems, etc. Or in a space like a university or a teaching space or an office space, we might be more interested in two-way communication between people and making sure that the people trying to communicate can hear each other intelligibly and not get distracted by all the other noise that’s going on around them.

Why is it an important issue to make acoustically good spaces?
Firstly, it’s because the acoustics can affect the functionality of the purpose of the space. In a teaching space, if the student can’t hear what the teacher is saying, you have lost the primary function of the space. So, we can say that there is functional importance. And the other thing is that it affects the experience. This also affects well-being, about how we feel. For example, in a noisy office environment all day, stress level rise because we can’t concentrate, we can’t get our work done, our productivity drops off. So, there are functional aspects and experience aspects.

In which stage and how acoustics should be handled in newly constructed buildings?
In terms of the stage, the biggest thing with the acoustics is to get the acoustic consultant involved as early as possible in the process. When the architects are doing an initial layout that’s the time when a decision can be made that really affects the acoustics and can have a profound impact on the acoustic outcomes and what’s required to achieve them. Changes can be made for little cost at that stage because you can move things around easily. For example, if you design a school and you put the basketball court above the theatre you will spend a lot of expense and space trying to stop the noise from the balls being bounced on the basketball court being heard in the theatre below. But if you put the theatre on top and the basketball court underneath, it’s much cheaper and much easy to fix. Having the acoustic consultant involved at an early stage can save a lot of time and money later on.

How should acoustic design process be in the buildings under renovation?
The big difference with adaptive reuse of an existing space is generally the unknowns. In a reuse scenario, there are lots of things we don’t know about until they start pulling down the existing walls and ceilings. The biggest thing to my mind in adaptive reuse is that you need a strong collaborative approach between the acoustician, the rest of the design team and the builder. Because there are inevitably unforeseen things that come up in the build process the important thing is to work through those issues collaboratively to find solutions on the run. That approach is the thing that makes a reuse project successful or not successful.

What are the acoustic solutions applicable to the open-air spaces?
If we talk about stadiums, stadiums have a whole unique set of issues. One of the things about them is that a modern stadium has to do many things. It has to be a sports facility, and also has to be a concert facility and it has to be a television and radio broadcast facility. There are lots of corporate requirements within stadia and a whole range of ancillary uses. So, trying to get all of those things working acoustically is challenging. Part of that would be the acoustics within the stands, what we call the “bowl acoustics”; acoustics of the actual stadium bowl. These spaces are so big you can have very late reflections, big long echoes in the space and you need to control those but still keep a sense of “life” in the stadium. There is a balance of acoustic clarity but also making a space that is conducive to a crowd at a game feeling a sense of involvement and shared experience. They are very challenging projects.

Would you tell us about your recently completed projects?
I will talk about some projects that Marshall Day Acoustics have been involved with recently, with the Sydney projects being those I have been personally most involved with. We did the Optus Stadium in Perth, Australia. It was completed last year and was a very complicated project.

We also recently completed work on the ANZAC Memorial Centenary in Hyde Park, Sydney. That’s a very interesting project because there are competing acoustic requirements with regards to the intent of the space. On one hand, it is a solemn space of reflection for returned servicemen and women, but at the same time, it’s also a space for education to bring groups of school kids through and be able to engage them in our wartime history. Trying to balance those uses was very interesting. If we come back to the concept of “experience of space” it is also interesting. It’s in the middle of Sydney on a busy road, and as you walk from the edge of the curb you start off surrounded by traffic noise but you then walk through cascading water on either side of the entrance walkway that become more elevated as you walk into the depths in between them. You experience more and more of the sound of the cascading water that drowns out the traffic noise before you finally step past the cascades and come into the place of silence. That is a great example of the acoustics being part of the experience of being in a space.

We just completed a project in Melbourne for the Melbourne Conservatorium of Music, the Ian Potter Southbank Centre. Again, that was a very challenging one because they had stacked performance spaces one top of another. We had music practice rooms and recital spaces that needed to be isolated from one and another within the building, but we also had a tram line directly outside of the building as well. So, we had to try to keep that tram noise out and all the noise of the busy cityscape. However, the architect also wanted to have a visual connection to the outside world, and they actually have a window into the main performance space directly to the street outside. Getting the required level of acoustic isolation was very challenging. Another project that we are about to complete in Sydney is the Sydney Coliseum Theatre which is a 2,000-seat theatre in Western Sydney. It will host a variety of musical theatre, rock and pop music as well as classical music. It was very challenging trying to get all of those musical performances, that have different acoustic requirements, to work together in one space. It will open in December.

How do you carry out acoustic performance testing at the end of the project to see whether there is a difference between the planned and the realized?
It will depend on the type of project but taking a theatre as an example we would measure a range of things. We measure the room acoustics, for example, the reverberation time, using IRIS 3D. We would measure how loud the ambient noise in the space is, from building services noise and from outside noise like traffic, using a sound level meter. We would measure the sound isolation inside the building, for example from the auditorium to the foyer, using a speaker to generate loud white noise and measuring the loss from one side of the wall or door to the other. We might also need to measure the sound escaping from the venue at neighbouring buildings, which we would do with a sound level meter.

Aside from methods coming from the past to date in acoustics, what are the new materials and applications that come out by technological developments?
For us, there are a lot of new technologies in the design tools we have. We now use a lot of what we call “auralization”. We model a space in 3D in the computer and then use either headphones or a set of speakers to hear what the space will sound like before it’s completed. We use this conjunction of virtual reality so, for example; we can put ourselves inside the theatre and listen to it as we make design changes to listen to the effect. Another thing that has changed is computer modelling. We have used computer modelling for a long time to calculate the acoustic performance of spaces. But we are now at the point where we can do a lot of modelling real-time using Rhino and Grasshopper and custom plug-ins and software. We can now sit next to an architect and with them, we can change and move surfaces around, sculpting acoustic reflectors, changing the curve and shape and position of them and look in real-time at how that is affecting the acoustic performance of the space. That’s very exciting. Parametric design is part of that too. We can set some parameters in the modelling tools. And then let the computer try a few thousand iterations of the design and tell us which one meets our criteria best. Those are some of the technologies available on the design side.

On the measurement side, probably the biggest development in the last few years for us has been our IRIS 3D system which we developed. IRIS is a 3D impulse response measurement system. It uses a dodecahedron omnidirectional speaker which sends out a source of sound and energy in all directions in a theatre and a four capsule 3D microphone in the receive location. It captures every reflection of every surface in both intensity and time so that we can look from the receiver location and see exactly where the sound is being reflected in the space. That allows great insight because the direction and the time delay that reflections come to us is very important in how we experience sound. Another thing is happening a lot in Australia is the use of CLT (cross-laminated timber) in mid-rise and high-rise construction of buildings. The flanking noise that travels from apartment to apartment or office to office is very different to the noise transfer you get with traditional concrete slab and steel-structured buildings. We have had to develop software that examines all of the flanking paths in CLT buildings, for example; via the floor or ceiling structures, in order to quantify them. 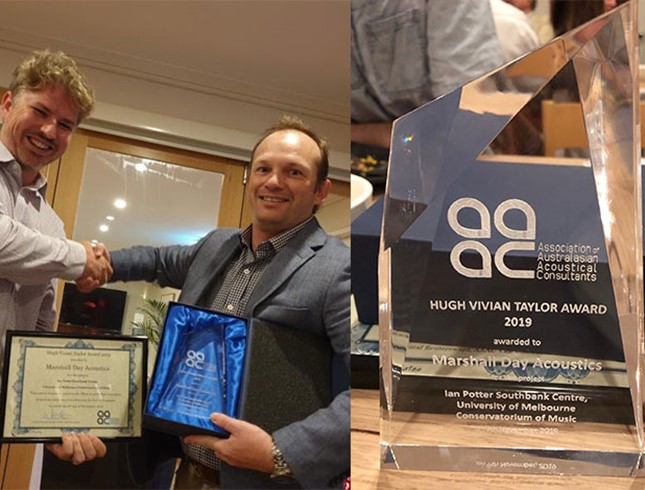